In May 2017 I was lucky enough to be invited by the Sheraton Grande Sukhumvit in Bangkok to visit as their guest celebrity chef and host a two-night, exclusive food and wine pairing event. 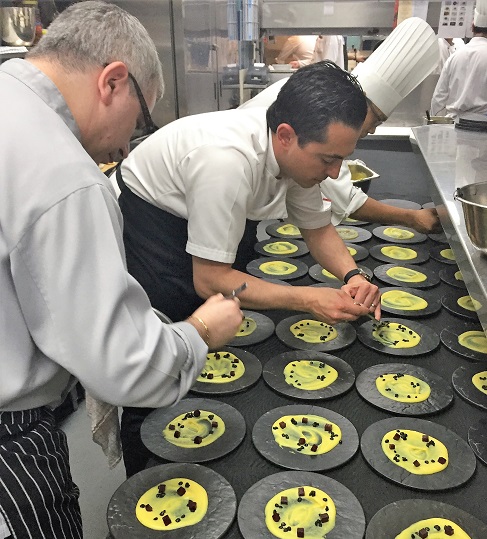 Well, I say host, I cooked and they hosted!The Sheraton Grande Sukhumvit

The Sheraton Grande stands as a beacon of classic opulence amongst a growing skyline of new, shiny hotels. There is a feeling of established luxury with the Sheraton that I really like. The room was very nice, the lobby is grand, the three, no four, different restaurants are very good but their real secret weapon is the staff who were always impeccably polite and genuine.

They have several areas but one that became habit for me was Salar – the tropical oasis outside with a meandering swimming pool and lots of shade (and rather spectacular cocktails if memory serves me correct).

The general gist of my stay was for me to cook some of my signature Greek Cypriot inspired dishes for a four-hand dinner with their Executive Chef Gaetano Palumbo.

It was an honour to work with Chef Gaetano and see such talent close up and learn some techniques from a master.

The first night was a warm-up evening where I cooked to order a set meze menu of five courses per guest. This was done in their casual dining lounge ‘Barsu’ and was a great fun night. 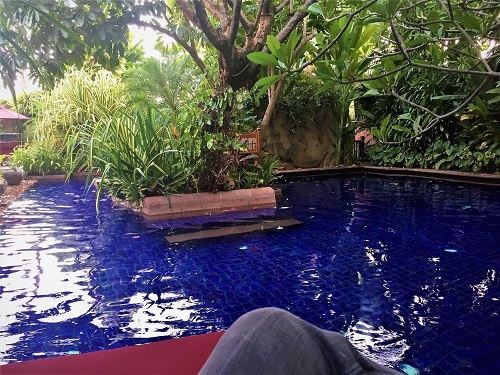 Salar – an oasis of calm in Bangkok

The next event was the main one and was held in their Italian fine dining restaurant Rossini’s. It’s a beautiful space with a stage kitchen. We created an 8 course tasting menu paired with wine and received fabulous feedback during and at the end of the night.

It was a real honor to work with Chef Gaetano and his team, as it also was to be so warmly welcomed by the GM Richard Chapman and Robert Wittlebrook Head of F&B.